Dr. Murphy earned his DMD from the Tufts University School of Dental Medicine in 2009, where he was a four year class representative and served on several committees including the Ethics, Professionalism, and Citizenship committee. While at Tufts, he received the Walther Askinas Scholarship for Excellence in Ethics and Citizenship and the Dr. Alfred Osher Endowed Scholarship.

Dr. Murphy completed his specialty residency in pediatric dentistry in 2011 at St. Joseph's Hospital in Providence, Rhode Island where he served as chief resident. Dr. Murphy is a board candidate with the American Board of Pediatric Dentistry.

Dr. Murphy lives in Easton with family. Dr. Murphy enjoys exercising, playing golf, and spending as much time as he can with his family. A passionate sports fan and athlete, he is a die-hard Boston sports fan and a Notre Dame football fan. 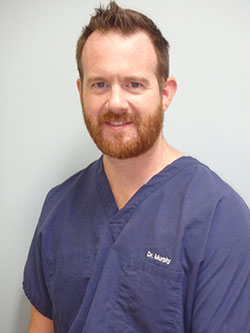